Guillaume Harvey’s The Last Rhinoceros: the eco-responsible shooting of a short film on eco-anxiety 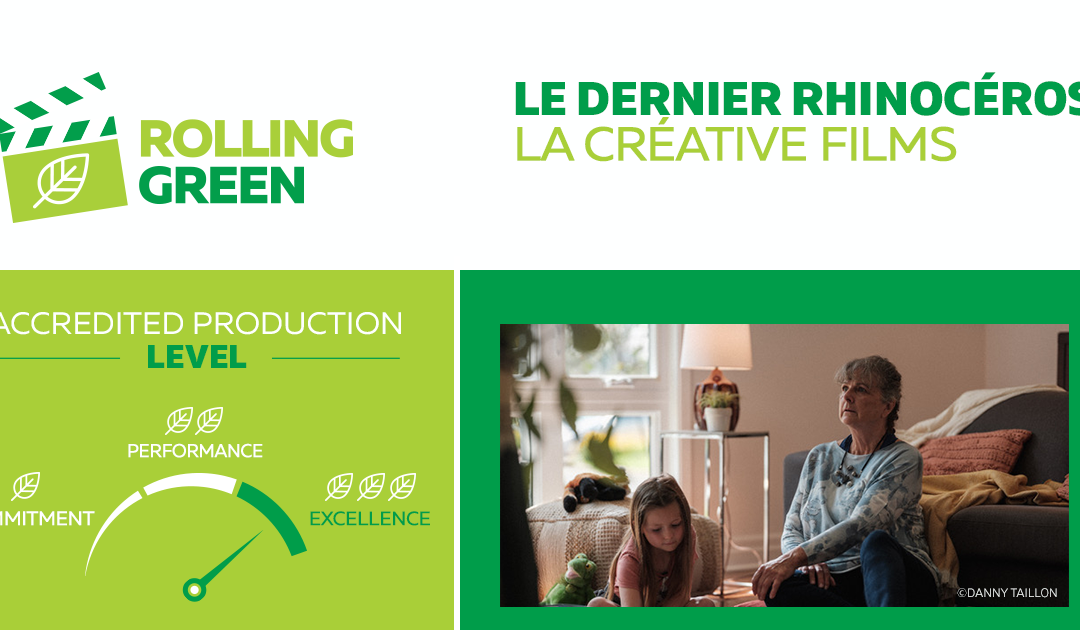 Directed by Guillaume Harvey and produced by La Créative Films, the production Le dernier rhinocéros received the Eco-friendly Filming Set Award presented at the 10th edition of Les Vivats on November 8, 2021. The new award is part of the Rolling Green initiative of the  Québec film and television council (QFTC), the Conseil québécois des événements écoresponsable (CQEER) and Québécor. A few days before the announcement of the Vivats, the production received a level 3: Excellence accreditation.

To implement environmentally responsible practices on the set of The Last Rhinoceros, La Créative Films was inspired by the 5Rs rule popularized by environmental blogger Béa Johnson to encourage waste reduction. Producer at La Créative Films, Mylène Corbeil explains that the 5Rs stand for :

On the set of Le dernier Rhinocéros, the 5Rs were first embodied in actions to reduce waste. With crew members bringing their own cups and water bottles, there were few disposable, recyclable or compostable containers or packaging. “There was almost no trash on set, except for one day, because of the sets. Since this is a film about awakening to ecological issues, we had to buy disposable plates, latex balloons, gift wrapping and plastic cups to represent a party in which overconsumption habits are present,” explains Estelle Champoux, producer at La Créative Films.

The production company also worked to reduce gas consumption. The team limited individual travel to Montreal’s South Shore, Laval and Grandy – where the shoot took place – by carpooling. Creative Films also put two departments – lighting and grip – in the same truck to reduce the number of vehicles. “We also used electricity from the houses we were shooting in to limit the use of gasoline generators,” adds Mylène Corbeil.

The producers chose an eco-responsible caterer for the team’s meals and snacks during the shoot – Nougat & Nectarine by Céline Carbonneau – and an eco-responsible canteen worker – Ariane Beaulieu. The food was served in metal lunch boxes which, like the metal cutlery provided during meals, were washable and reusable. “Only the salads were in cardboard dishes, and they were compostable,” notes Estelle Champoux. However, the small budget of the production did not always allow for the use of local products, which are often expensive.

The objective of La Créative Films was to show that shooting a short film in an environmentally responsible manner is possible. However, this does not come without challenges. The first challenge the production faced was the limited budget: “When we produce a short film, all the money is counted,” explain the two producers. In agreement with director Guillaume Harvey, they therefore set aside a budget of $2,000 from the outset for the eco-responsible shooting.

Some actions also posed difficulties, such as composting. It is possible to rent a container to collect the compost, but the cost of such a rental – around $600 – is often too high for short films. On location, the production used the compost bin in the office and house they were filming in to collect the compost. The crew members organized themselves among themselves by bringing their own compost bins to carry the waste and put it out at the same time as their personal waste.

All in all, the actions implemented on the set of The Last Rhino cost around $300. The rest of the budget allocated to the green set – $1700 – will be used to buy back the CO2 produced during the shoot. After calculating their carbon output on the Albert calculator – We’re shooting green has produced an article explaining how to use this calculator -, La Créative Films will donate the cash equivalent to a green initiative, such as tree planting for example. It will thus be carbon neutral.

Some tips for a successful green shoot

Mylène Corbeil and Estelle Champoux point out that every shoot is different and that you must constantly reinvent your green actions. For each shoot, they recommend thinking ahead to a list of actions to be implemented on set. “We sent an email to the whole team with a letter of commitment describing the eco-responsible actions to be implemented during the shoot,” they explain. They also listed, department by department, the specific actions recommended in the Best Practices Guide and suggested them to their departments, without imposing them.

Another tip is to follow up with the entire team at various points in the production to ensure that the actions are being followed. “The further along you get, the more time you run out. It’s easy to fall back into habits that we know are fast, but that are not environmentally friendly,” says Mylène Corbeil.

Ultimately, by implementing a green filming policy, La Créative Films hopes to change mentalities and give team members the desire to continue their eco-responsible gestures on their future sets. Ideally, these actions should become an integral part of their work process. If you want to know more about how to make your shoot eco-responsible, learn more about the Green Shooting accreditation by clicking here.